The kingpin of TREMEC’s high performance line-up, the Magnum double-overdrive 6-speed transmission takes the very best from TREMEC’s current OEM technologies and pairs it with the most popular features of the TKO 5-speed.

Able to withstand a massive 700 lb-ft. of torque while providing unbelievably crisp shifts, no other manual transmission on the planet offers as much combined strength, versatility, and general ease-of-use as the Magnum.

Known in its original equipment form as the ‘TR-6060’, the Magnum is an aftermarket version of the same transmission found in many of today’s most celebrated factory muscle cars – including the Dodge Challenger and Viper, and the Chevrolet Camaro – giving you refinement where you want it and strength where it counts. 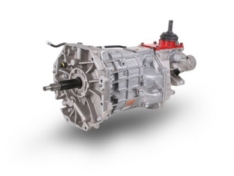